Inside: My pork chop hashbrown casserole is hearty, and an easy dinner. If you want something that is easy and bakes in one dish, this pork chop casserole recipe is for you.

I love recipes that are made in one dish… especially on Sunday nights when the weekend’s been busy and I want to spend time with my family rather than in the kitchen. If that sounds like you, you’ll love this easy Pork Chop and Hashbrown Casserole too, as you simply throw the ingredients together and toss it in the oven – easy as pie.  🙂 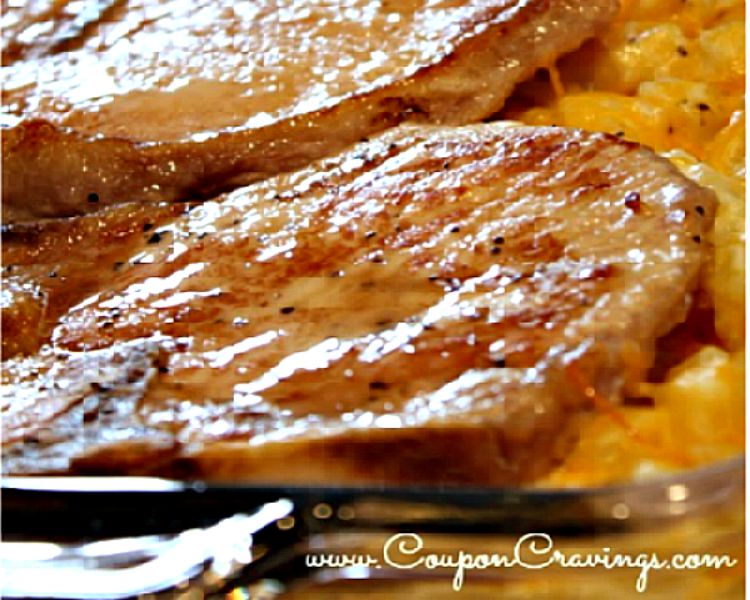 Can I substitute Cream of Mushroom soup in this pork chops and hashbrown recipe?

You can absolutely substitute Cream of Mushroom soup for the Cream of Chicken soup in this oven pork chop dinner recipe! I haven’t tried substituting the soups, but if you like the mushroom better than the chicken, try it out and let me know how it goes in the comments!

Can I make this pork chop and hashbrown dinner in the Crockpot?

You know, you could … but I probably wouldn’t recommend it. If you’re itching to make a rockstar slam dunk Crock Pot recipe, try my Crock Pot French Dips or Crock Pot Philly Cheesesteaks. Those will cook long and slow all day and the 100k plus reviews only leave you wondering how you ever lived life before them!

Can these be made into hash brown crusted pork chops?

Oooooh! You like a crustier pork chop? You’re in luck! Instead of frying the pork chops, follow a recipe like this one to make Panko breaded pork chops. There’s no doubt in my mind that you’ll love them!

Can you cook pork chops in the oven?

Cooking pork chops in the oven is so simple! This recipe is the perfect example of how this can be done really easily and still have a full meal made out of one dish.

My only recommendation is that when you bake pork chops in the oven that you brown them in a hot pan with oil first. Even better if you have a cast-iron pan like this one that I have that gets screaming hot that you can brown the pork chops in.

Are you looking for more pork chop baked recipes that are this easy and this delicious? After you’ve tried this pork chop hashbrown casserole, you might give this baked parmesan pork chops recipe or the Happy Home Fairy has the recipe for these honey garlic pork chops that also look amazing!

Doing the low carb thing?? Good for you! My roend Kasey wrote a pork chop low carb recipe that has gravy for pork chops and pork chops combined and is low carb – yes, she is in fact amazing! Check out these low carb smothered pork chops!

This recipe isn’t a pork chop and hash brown crockpot recipe, but I found one that you’ll want to try if you’re after a pork chop Crock Pot recipes to make. This crockpot ranch pork chops and potatoes recipe looks fantastic!

Can you grill pork chops?

Should pork chops be pink inside?

In case your pork chops are done cooking and they’re still a little pink and you wonder: should pork chops be pink … the answer may surprise you! Pork chops can be a little pink inside actually! As long as your [work chop measures 165 degrees at it’s thickest part of meat, then you are good to go!

In fact, you want a little color – as long as you get to the safe temperature of 165 degrees! I use a basic thermometer (this one, exactly) , but for Christmas I’m asking for this one that can withstand high heat so I can watch the temperature as the meat cooks to make sure it’s done to perfection! I measure chicken and pork with a thermometer and just wash it in between meals and meat types.

So, to answer the initial question: can pork chops be a little pink, or should pork chops be pink in the middle? The answer is yes, they absolutely can.

How I whip this delicious easy dinner idea up:

Brown the pork chops on both sides in the oil in a pan ( I can’t recommend this pan here enough, it’s a top seller on my site and a #1 Best-Seller on the Amazon site – WOW!! ) 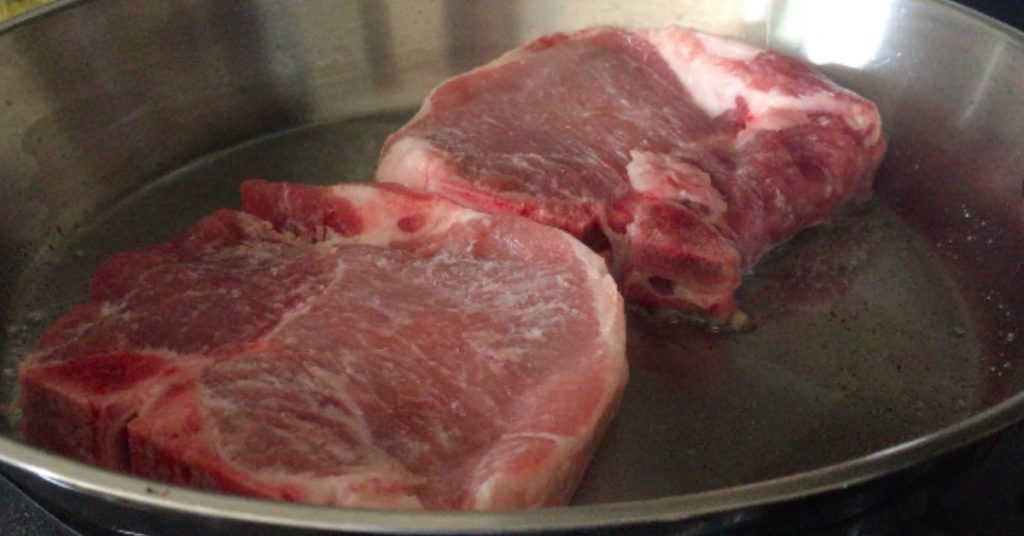 Combine all other ingredients (hashbrowns last) and spread in an ungreased 9×13 glass dish (I use the one here and pictured below and love it). Top the cheesy hashbrown mixture with pork chops. 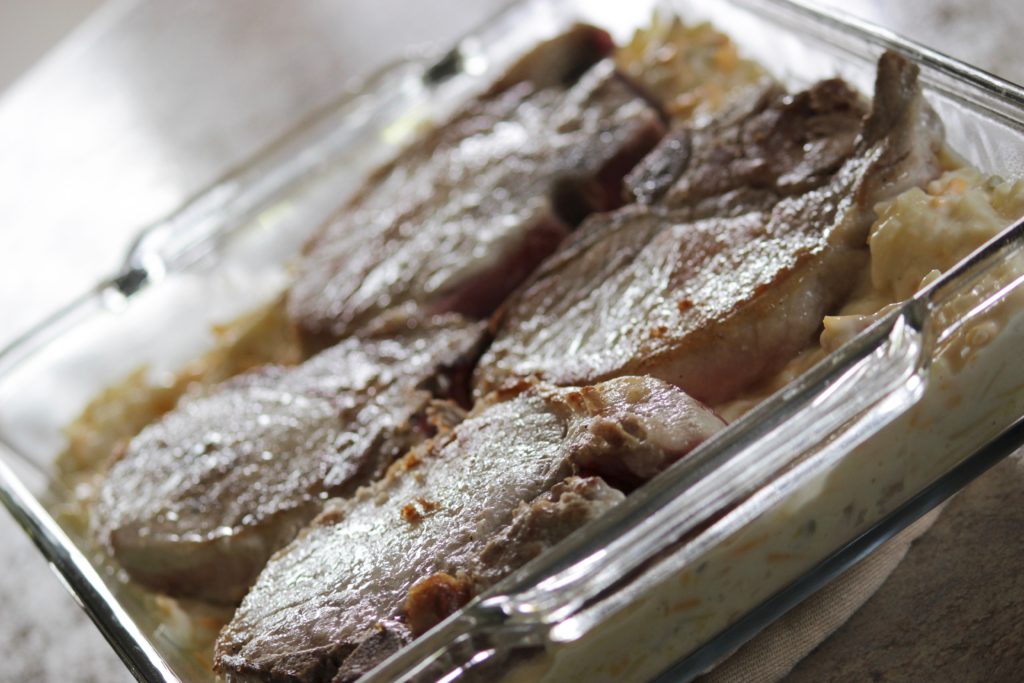 Bake uncovered at 375° for 45-50 minutes or until heated through and the pork chops are fully cooked. See, so easy and delicious. 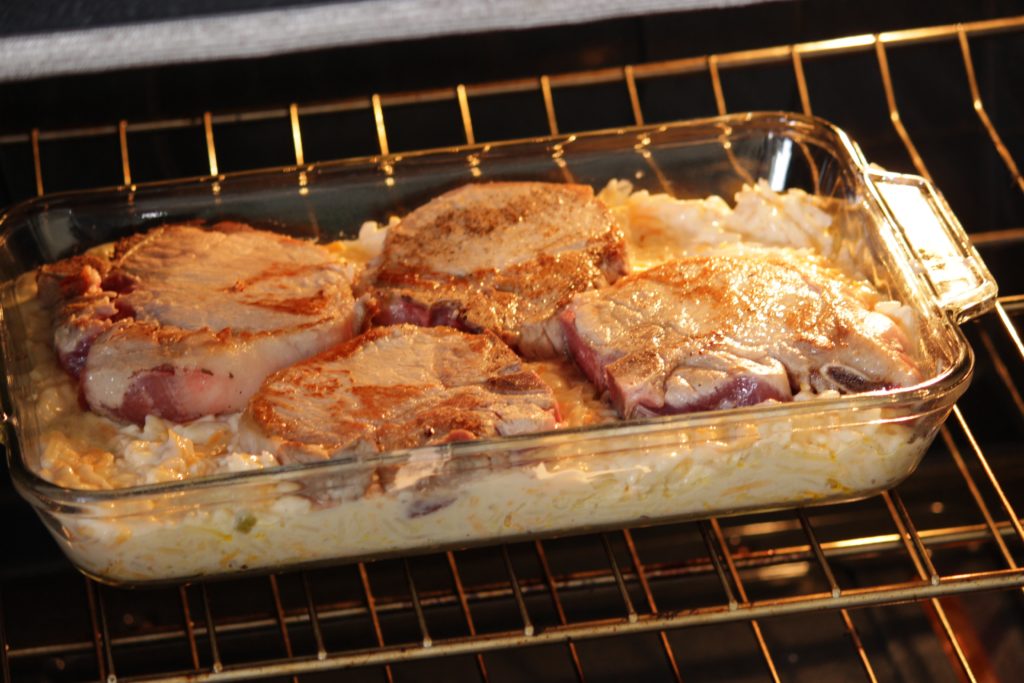 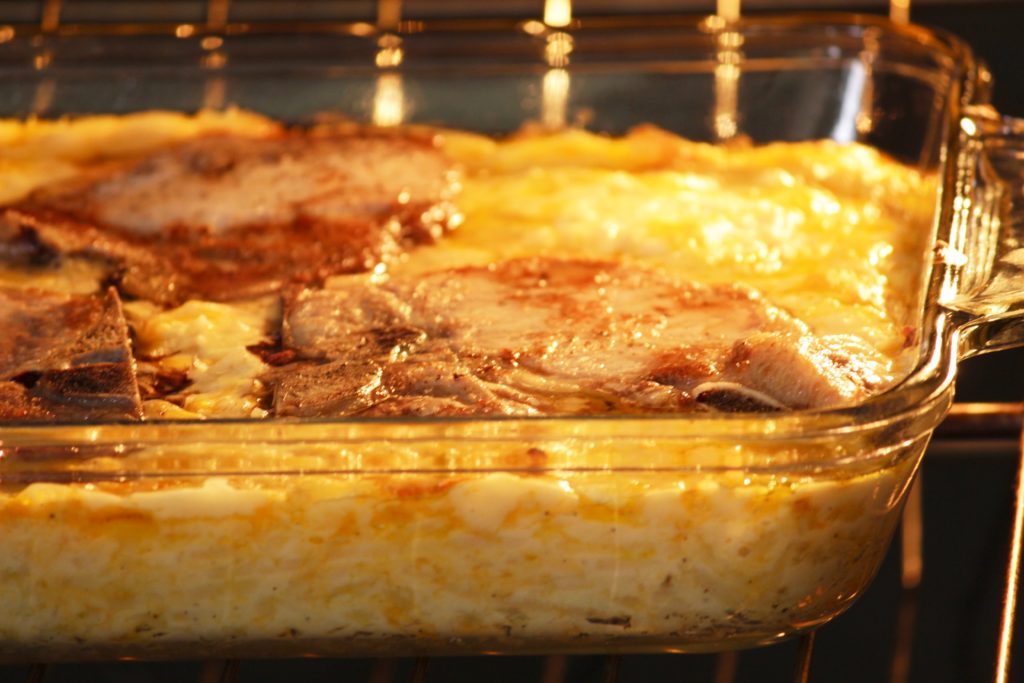 This recipe makes a lot of food – I usually half this recipe for my little family of four. 🙂

If you’re on a mobile device, click here to Pin this recipe for later.

For this recipe I used: 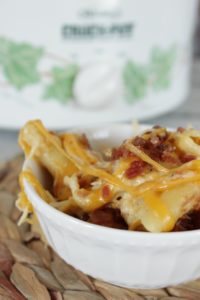 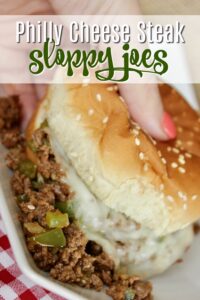 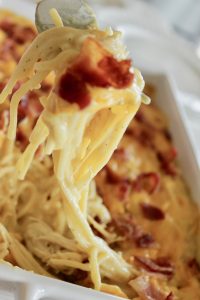 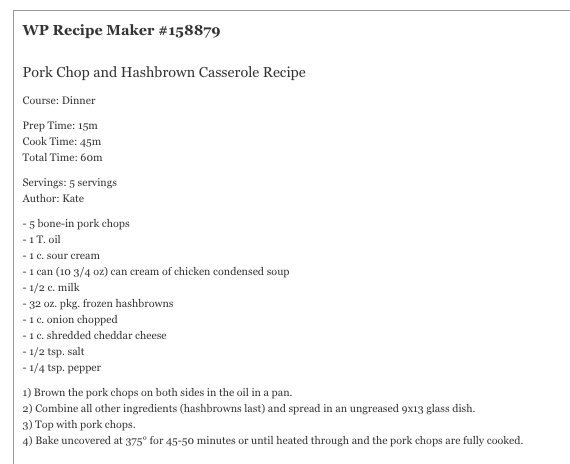 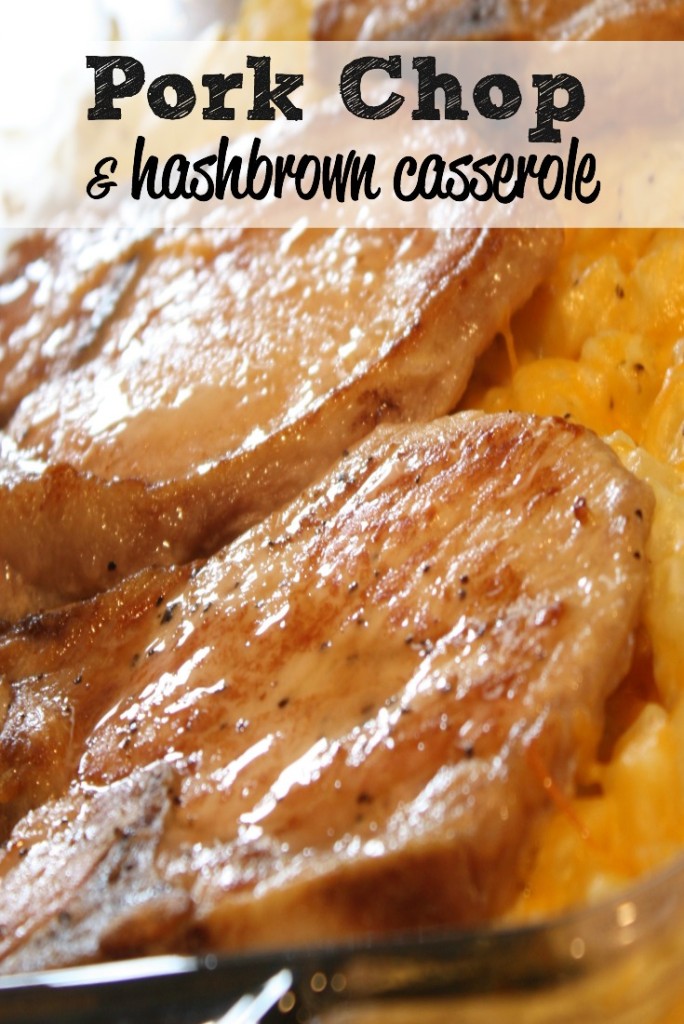