This Mexican shrimp fajitas recipe is seriously the BEST meal and is SO impressive. Whether you need easy dinner ideas or you’re looking for something to wow guests, this will be a staple on your dinner menu!

We had friends over for dinner recently and since it was a Friday during Lent (atleast when I am writing this post), fish was on the menu.

I was actually thinking about a nice salmon recipe when the thought of Mexican food crossed my mind. Cheese dip, guacamole, salsa … these were the only things that seemed to suffice any cravings I had, so I knew I had to make up this Mexican shrimp fajitas recipe I’ve been dying to create and devour.

Can we dream for a minute about sautéed onions, peppers, shrimp and seasonings all perfectly baked and broiled in the oven on a cookie sheet of amazing goodness? That’s what this recipe for shrimp fajitas is all about. And, you wanna know what? It’s Monday and I’ve eaten a shrimp fajita for every single meal because they’re fantastic. I deviated and had chicken and noodles when we had my grandma over for dinner last night, but only because that’s what everyone was eating so I felt like I had to.

So, from that you can tell that I had leftovers. I need to make sure that it’s not because they stunk, but rather because this dinner made a boatload of fajitas. There were four adults, we all had three fajitas on Friday, and I’ve eaten seven (gasp!) since. Seriously, this just got best dinners at home status.  🙂

Here’s how I made this shrimp dinner:

If your shrimp is frozen, you’re going to want to thaw it as directed on the package and remove the tails from each piece of shrimp.

Combine all veggies, spices, shrimp and olive oil in a large bow. Mix all ingredients really well to get everything coated. 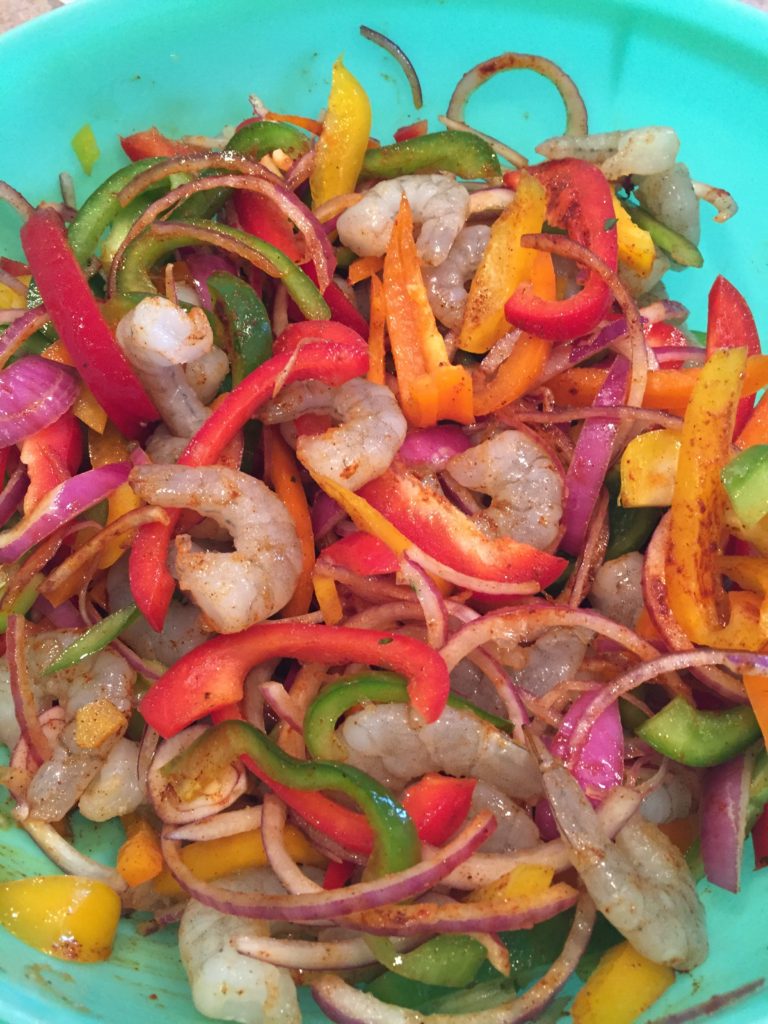 Put the concoction in the fridge for a couple hours to let your flavors all come together perfectly… you’ll begin to see the goodness starting to come together already at this point.

Next, spray your baking sheets. I was in too big of a hurry to take pictures of that part, but you’ll want to use big baking sheets like these.

Spread the mixture out well and put them into your oven, preheated to 450 degrees for 10 minutes. If you want them to be a bit browner, you can turn the broiler on for 2-4 minutes, depending on how well your broiler works (don’t burn them!)

Once the shrimps come out of the oven, let guests serve themselves from the pan of fajitas, or put them in a serving bowl like I did alongside some guacamole, sour cream, cheese dip, shredded lettuce and tortillas.

These are divine! A show-stopper, for SURE! 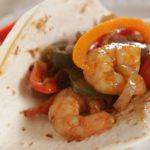 This Mexican Shrimp Fajitas Recipe is second to none. I 100% know that you'd be hard pressed to find any that is as good as this one!
Course Dinner
Cuisine Mexican
Prep Time 20 minutes
Cook Time 15 minutes
Total Time 35 minutes
Servings 20 fajitas
Author Kate