These Crockpot Shredded Chicken Tacos are my favorite to make because they only require four ingredients and everyone can use the topping they want. This is at the top of my easy dinner ideas whenever the week is going to be too much.

So, we are huge convenience meal kind of people here. I absolutely LOVE a meal that can come together in less than 15 minutes. So, it’s only natural that I love my crockpot. And, of course, I also love some good Mexican food. Ask anyone who’s around me often and they’ll answer “yes, indeed, she could live on Mexican food if she knew she could”. Seriously, the best!

Fortunately, we’ve got chicken taco meat down to a “t”. The shredded chicken tacos that I make are absolutely the best, they’re simple to make and they only require four ingredients, plus of course the “fixins'” and toppings. Can it get any better that that as far as easy dinners go?! This crock pot pulled chicken is truly the best I’ve ever had and it’s so versatile as well. At my house we use this Chicken Taco Meat for not only tacos, but quesadillas and chicken nachos as well. So, so good! 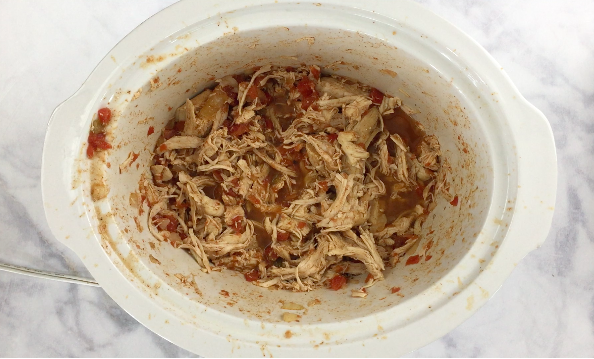 And, rest assured that you can double the recipe, too. You’ll want to adjust your cooking time and when you’re cooking chicken in the crockpot I always recommend putting a meat thermometer in the thickest part of the chicken breast to assure the temperature is safe at 165 degrees or above. You can find meat thermometers here ranging from $4-$10. I also found this helpful article on how to adjust crock pot cooking times.

Here’s how I whip up my Shredded Chicken Tacos:

In a four quart (or larger) Crockpot layer your boneless chicken breasts on the bottom. I only made meat for about 8-10 chicken tacos using the two chicken breasts in the recipe here, so if you’d like to have more meat, simply double the ingredients. I wouldn’t recommend heaping too many chicken breasts on top of eachother, just use an additional crockpot to make more meat.  😀 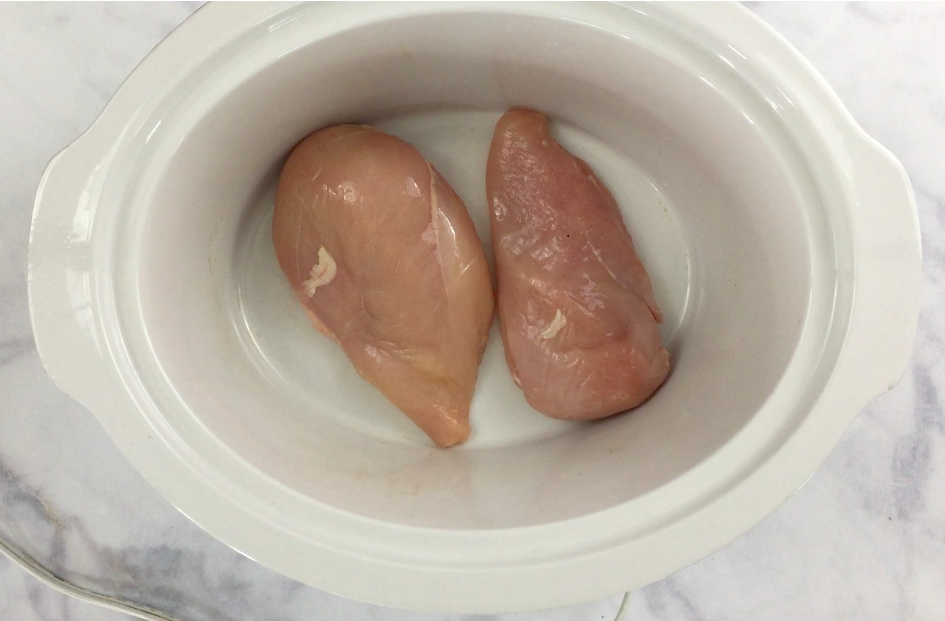 Next, sprinkle on the taco seasoning. Don’t skip this part or you’ll have some pretty bland chicken. 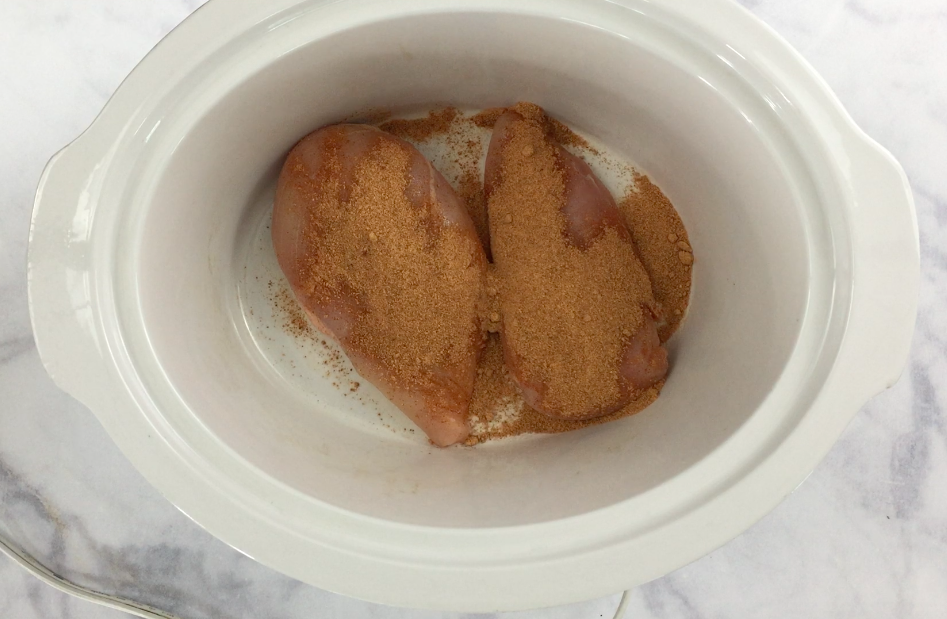 Add a can of Rotel. Do not drain the Rotel prior to adding though! 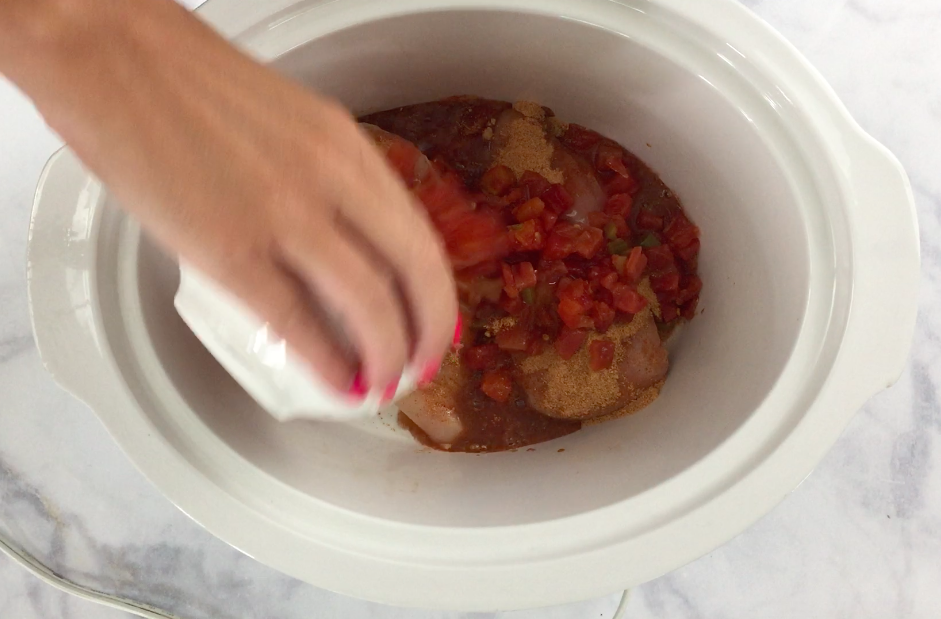 Dice up one quarter of a large yellow onion. Even if someone in your house doesn’t like onion… don’t skip this part! Because there’s only four ingredients, every ingredient is pretty crucial to giving the best flavor.  😀 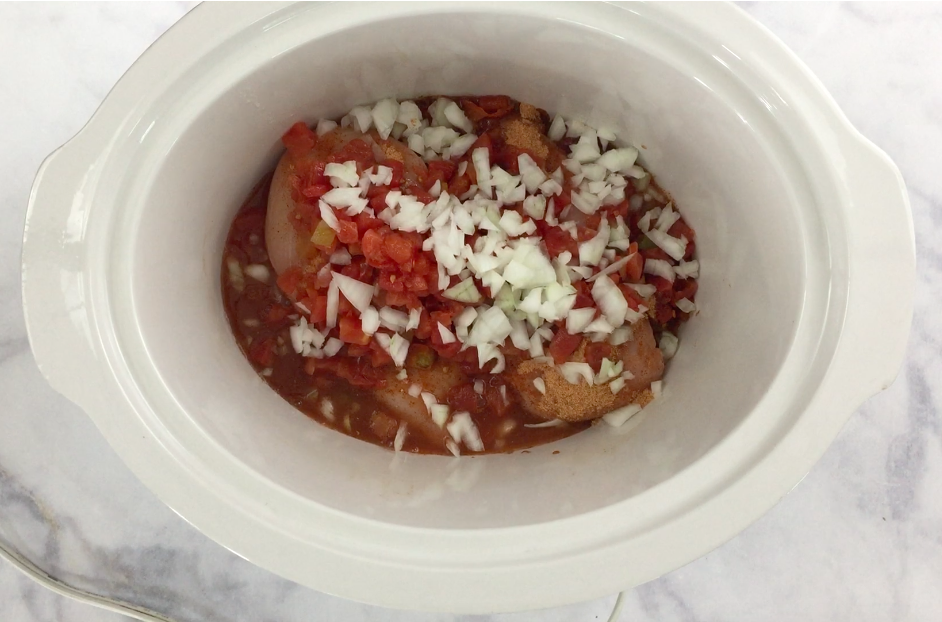 Cover the crockpot and cook on high for three to four hours, or on low for six to eight hours. Don’t forget to check the temp of your shredded chicken taco meat with your meat thermometer!

Once you’re right on for the temperature, shred the chicken. You can certainly do this many ways. You can mix it in the crockpot with your hand mixer, which is the way I do it. It’s the easiest way for me and I’ve never had any issues. Or, you could use two forks to shred it. Or, you can transfer the chicken out of the crockpot into a large mixing bowl and shred it using either method above that way. Totally up to you! This is the hand mixer that I’ve been using for eons and I love it — it’s not failed me to this day and I use it a LOT. 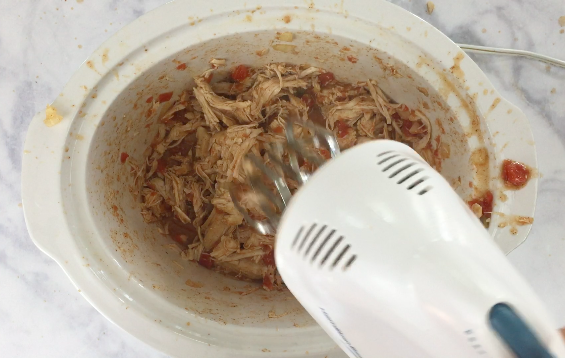 Finally, serve your pulled chicken with tortillas, shredded cheese, shredded lettuce, sour cream, and all of the other fixings. If you’re looking for a tremendous salsa, you won’t want to miss my Canned Tomato Salsa — it’s my favorite and too easy.

This recipe for Crockpot Shredded Chicken Tacos doesn’t get any easier with only four ingredients and being made in the crockpot!
Course